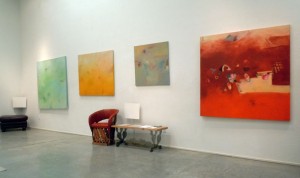 M. Oliver’s paintings of the last two years unfold in a slow and seductive progression, becoming ever more ethereal and nuanced in color even as they remain grounded in her own quirky vocabulary of line and shape. Part of the pleasure of this show is the way the artist lets the viewer into her process.

The first sizable work, “Earth with Fire”, appears to be a rather tightly controlled riff on a still life, an almost Cubist composition with quasi-recognizable subject matter (there are suggestions of a table, a fish, plates, and so on) whose boundaries never quite assume precise shape but melt into each other. 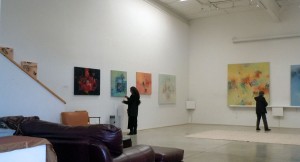 In subsequent paintings, the tinted ground takes over and assumes an ever greater force; I was enthralled by the way my eyes kept discovering gradations of tone that created a kind of pulse in what critics are fond of labeling “optical space.” Closer examination reveals the artist at work, scraping off areas of the canvas and amending her scribbled lexicon so that figures and ground are in different dialogues with each other. We’re always a little off balance here, but it’s a kind of pleasurable woozy in between sensation, like the space that exists between dreaming and waking. 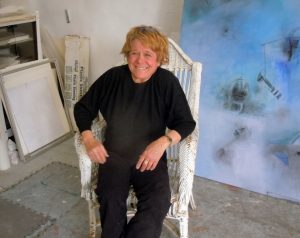 Oliver has stated that her roots lie in Abstract Expressionism, and indeed her work partakes of some of the aspects of that movement: a love of spontaneity, obscure but suggestive imagery, and a certain painterly daring. Whether consciously or not, she also summons up allusions to earlier artists, notably Cy Twombly, Paul Klee, and Arshile Gorky. But like the best abstract painters, she finds a way to an imagery and a luminous contemplative cosmos that are all her own.